Integration of Non-Motorised Transport (NMT) infrastructure in most African cities has always been an afterthought. This has been witnessed by the uncoordinated mix of modes in the urban areas and the continuous effects it has had on the economy and the functioning of major towns and urban areas. The City of Kampala has decided to trailblaze in this area of transforming urban mobility in East Africa, a region renowned for traffic congestion and stressful commuting. This was necessitated by the ever-increasing urban population and the resultant increased demand on infrastructure. Namiremebe Road and Luwum street were chosen as the pilot areas for the program as they pass through the city center and are the major public transport hub for in the city. The aim of the program was to have an integrated network for all modes. 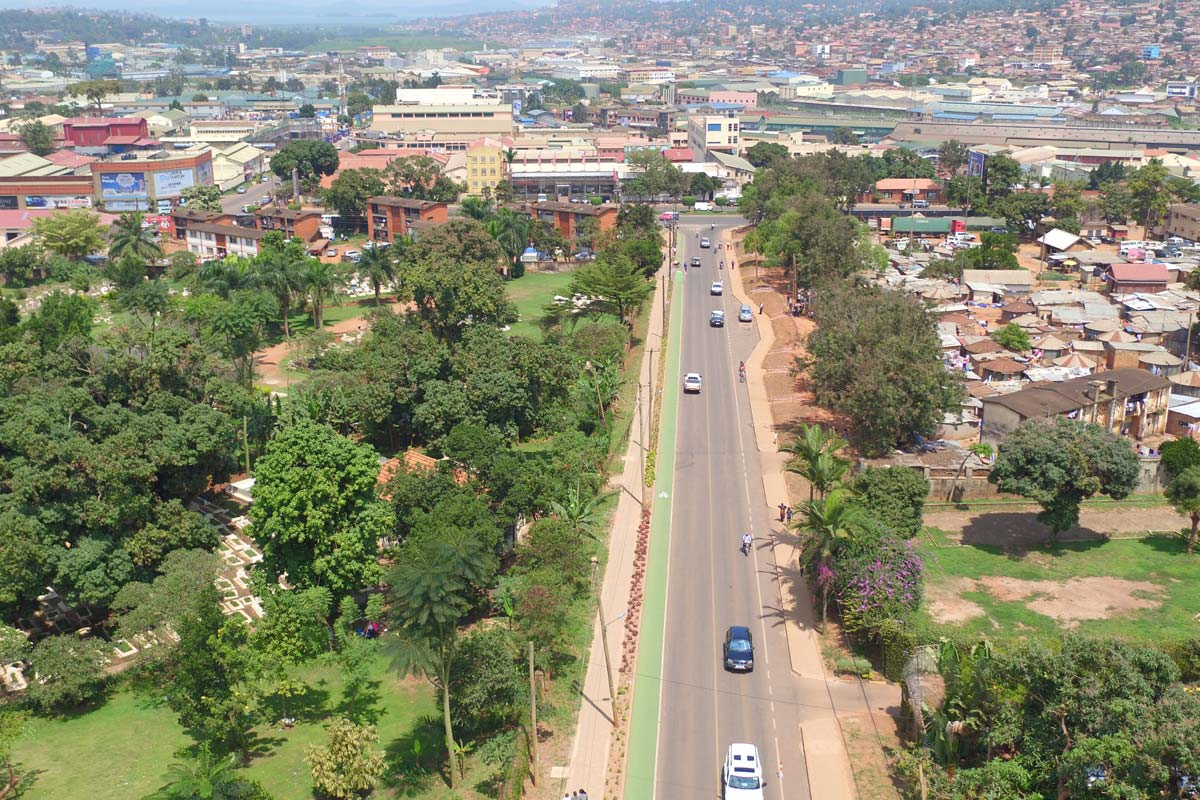 Kampala is the political and commercial capital of Uganda and thus the engine of growth for Uganda. Kampala covers a total area of 197km2. Its population rises to 3.15 million people in the daytime and falls to about 1.5 million at night. Kampala, like many other cities in Africa is faced with challenges of massive population growth due to the increased movement of people from the rural areas to the urban areas, poor integration of the various modes of transport and inadequate provision of municipal services.

The Kampala Central Business area is mainly the down town area of the city which encompasses the highest population of the city dwellers during day. There is generally low mobility with an average of 2.3 trips per person with the poor doing less trips. Due to high and unpredictable costs for public transport, the poor are forced to walk to save the 22% of their income rather than spend it on transport. In addition, statistics show that pedestrians contribute to 50% of road fatalities in Kampala. This was traced down to the lack of safe walking spaces for the pedestrians who are a large proportion (approximately 42%) of the road users in the city. 47% of the road crashes were due to vehicle driver’s faults.

Kampala Capital City Authority is mandated under the Directorate of Engineering to monitor and propose areas for improvement of city traffic, plan, design and manage public transportation in the City. One of the very many proposals targeted at changing the transport face of Kampala was the Pilot Non-Motorised Transport corridor on Namirambe road and Luwumu Street.

The NMT route targeted to improve and stimulate travel by sustainable modes (walking and cycling) while providing safe spaces for a highly pedestrianized section of the city. KCCA was committed to promoting and implementing a pedestrianized zone in the city with a vision of gradual expansion of this zone.

Access to the public transport (Taxi Parks) would be improved by eliminating the conflicts between vehicles, pedestrians, cyclists and motorcyclists. Most importantly, the NMT route would serve as a direct linkage between the down town business centres to the corporate office centre. This would boost business growth between the two areas and cut the time spent to access services between the two areas.

The NMT corridor would answer the question of imbalances in the access to transport opportunities for the different income groups but also allow for social inclusion of the previously not catered for group among the vulnerable users. 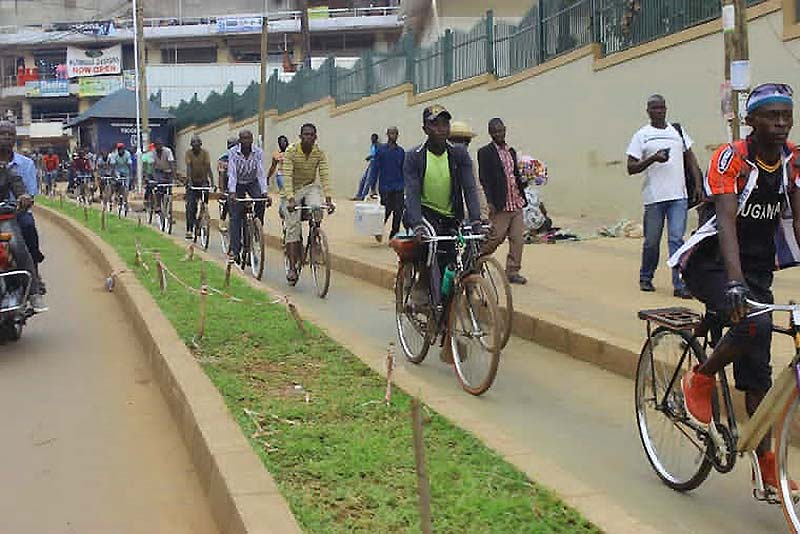 A study funded by UN Habitat was carried out by Move Mobility DV, that culminated into a design for the Pilot NMT corridor on Namirembe road to Luwumu Street. Some of the key components are:

Integrated land use planning and transport planning has helped in managing traffic generated by the various activities within the city centre. The pedestrianization of the two streets has helped in minimizing the dangerous mix of modes that were witnessed before. This has also minimized the pollution that was seen before from the emissions and noises from vehicles. There have been mixed use developments that have helped in proper utilization of space and buildings along the two streets. The provision of dedicated cycle lanes and walking paths have minimised accidents that occurred more often before. 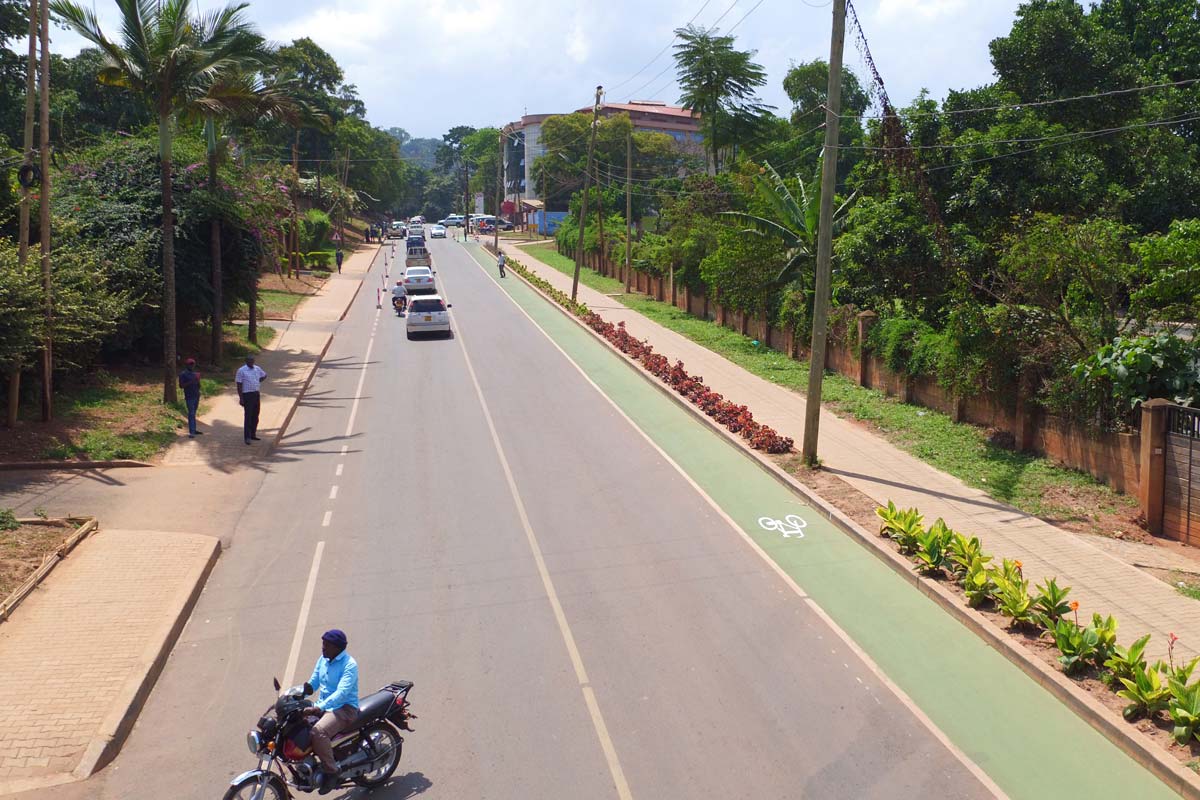 The implementation of this project completely eliminated road traffic injuries and fatalities along the NMT corridor which had become a daily contributor to the statistics.

Retrofitting the street has not only enhanced the mobility of the low income earners, but also improved access to services there by boosting the economic growth of this sector.

Implementing a pedestrianised zone in the city was very successful and strengthens the vision to gradually expand this zone in the short term. The medium-term plans include improving human settlements and development of an initial integrated public transport system with bus rapid transit as the backbone.